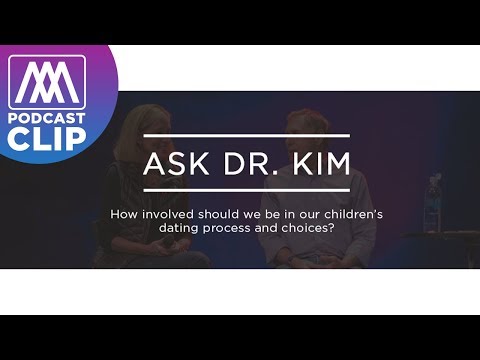 Another rule that I see a lot, besides like when and where they can date, and how old they have to be, is just like doors open when they're over So when you do decide, okay they can have a boyfriend or they can have a girlfriend, depending on the sex of your child, they can come over, they can visit the house, but you can't just run off to your bedroom and the door shut

The door needs to be open, things like that, I think are just general rules of what do you want it to look like Are they allowed to go on dates by themselves? Are they allowed to go on dates by themselves but only in public places? Because there's a difference between, "Oh I'm gonna go to my boyfriend's house and his parents are out of town and he's gonna cook me dinner" And going to a movie where there's like a bunch of people in the movie Those are two very different scenarios So just make those decisions, and try to make those decisions ahead of time

Like maybe before your kids start So for those listening, who their kids aren't desiring today yet, now would probably be a good time to have this conversation about what you want that to look like And then, to convey those to the kids when you begin to let them date I think for them to know what the rules are in the house, boyfriend or girlfriend is over, is really important We were probably different in some ways, but our kids were never allowed to have the boyfriend/girlfriend in the rooms

Now, we would accommodate that if they were gonna watch movie or something Nancy and I don't watch a movie If they asked us to watch with them, we would But if they didn't, we'd go a room or we're gonna do something else Now everyone's well when I walked through the room, yeah

I would not look like I would just scare them when I walk through But I just casually walked through and "How's the movie? Is it blah blah blah," like that And I think you just kind of let the kids know what you expect

But the worst thing is I think to blindside them with something Or if you haven't thought about it and then you panic when a situation comes up, you're probably not gonna handle it very good Yeah, definitely That's really good advice

View All
DO'S And DONT'S