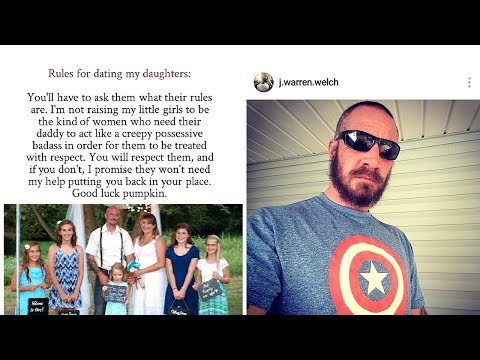 Rules for dating my daughters: You'll have to ask them what their rules are I'm not raising my little girls to be the kind of women who need their daddy to act like a creepy possessive badass in order for them to be treated with respect

You will respect them, and if you don't, I promise they won't need my help putting you back in your place Good luck pumpkin Hey y'all I'm J Warren Welch

You can call me Jeff That's cool Many of y'all may have seen my "Rules for dating my daughters" posts late last year on Facebook, or heard it talked about on Good Morning America, The Today Show, several online publications like Scary Mommy, or Maxim online I also got to write an article for Redbook magazine which was pretty exciting Just about everybody got involved except Ellen, which I'm still a little bitter about but maybe one day

Call me Ellen It was a pretty big deal for about 15 minutes or so, so you may recognize me I did wear the Captain America shirt that was in an Instagram picture most of these publications used when they talked about it, so I thought that might help refresh your memory My oldest daughter Jade got this shirt for me for Father's Day a few years ago so it's pretty special to me I'm actually more of a Deadpool kind of guy, but at least Captain America could punch a Nazi in the mouth without having an existential crisis about it, so that's pretty cool, it's also probably another video so

I typed that post up and threw it on Instagram and Facebook after a week where I had seen three or four advertisements for that really douchey "ten rules for dating my daughters" t-shirt ,and then I actually overheard a conversation between adult people about sitting on the porch cleaning your pistol waiting for your daughter's boyfriend to come over, and I just thought that was really creepy Also, personally I'd like to think that even if I was the kind of grown man who got off on scaring little boys, I could do so without a pistol, but that might just be me I guess So I typed up my little rant and threw it on the internet and didn't really think anything about it until a couple days later, people were sending me messages at work saying they had seen it talked about on Good Morning America and the Today Show and things got pretty crazy for two or three weeks

The response was actually overwhelmingly positive I did get a few people who stopped by in the comments to call me nasty not nice things that I had to Google and I was really only into a few of those things Now there were some people who disagreed in a more thoughtful manner, and seemed to think that maybe I didn't possess the normal amount of protective fatherly instinct, and that's not the case, and I'm not gonna throw out a one in four, or one in five women have experienced some form of sexual assault statistic here because that'll leave room for some bro to jump in with a "well actually" and that's what we're not gonna do I'll just say it this way I have known personally far too many women who have experienced that sort of thing and even more who have been in terrible abusive relationships with narcissists, and when I look at those statistics from my personal experience, and then I look at five little girls that I'm responsible for, those odds are terrifying, so

and I can't be five places at once, and I'm not gonna be here forever So these little girls have to grow up to be the kind of women who can take care of themselves and that's how I'm protecting them, is trying to raise them in that way, and have them not have to be relying on me to be safe I want to wrap this up with the message to men particularly fathers of daughters

Here's the thing ya'll I've been calling men out on their bullshit since way before I had daughters, and far too often the response from other men is something along the lines of "that's just locker room talk Boys will be boys" until one of those boys walks out of a locker room and shows up to pick up your daughter If your rules for dating your daughter are not consistent with your rules for being a man, and your own rules for how you treat a woman, then not only are you a hypocrite, but you're the reason people have to worry about the men their daughters associate with It is way past time to fix men y'all

All men, not just the men that are dating our daughters