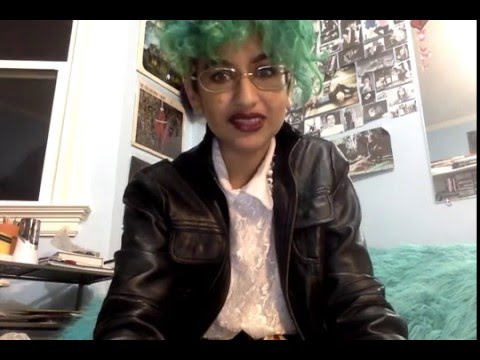 Hi! I'm Riya, or Bill, and I'm a wheelchair user And um

Annie Segarra, and buzzfeed, did a couple videos answering questions about wheelchair and dating life, and what it's like, and more perspectives are better so I decided I'd answer these questions for you Um, oh, and to disclose at the beginning I'm in a polyamorous relationship I'm dating two people

Um, yeah so it works! First question: Do you think there are any advantages to dating in a wheelchair? Um I mean y'know, you find out who are assholes (laughs) and um it's also cool 'cause like I know the people I'm dating won't leave like if something drastic happens like I end up in a wheelchair They're still gonna be around like, they're willing to work with different things They're open-minded, and they're willing like- it makes communication a lot more because I have to communicate So, that's cool That's an upside, and um, sometimes there are certain things that are really romantic about being in a wheelchair, or like, intimate

Like getting pushed around, and things like that I kinda like that in romance, like, it makes it fun, and it makes it special, and makes me feel close to people Um, the second question: Do your dates ever offer to push you around in your wheelchair, instead of doing it yourself? Does this make you feel angry or awkward? I actually just brought that up but, yes Um on first dates, it's a little bit weird because there's a lot of explaining to do on how to push me, and I have sensitivities to like, bumpiness and things like that Which make it tough, and then there's just learning how to push a wheelchair, but um I appreciate it, because I can't push myself an entire outing, and as long as they like, offer and don't do it without asking, it's actually really nice Has a guy ever been able to pick you up and almost cradle you? This is This is a strange question

I don't think anyone's tried I mean people probably could pick me up? but I-I I mean I guess if you ask I'd- I mean I wouldn't be okay with it, but some people might? What do you do when your date says they want to take you to some place you know is not wheelchair friendly? I say no

I speak up (laughs) Um they have to figure it out, like, there's so many places that are accessible

I mean, there are so many places that aren't accessible, but there are also so many that are, and like we can figure something out I can suggest somewhere else, but if we go somewhere that's not accessible, it's just not gonna happen So- and I usually check myself even if they suggest a place and they say its accessible because there's "accessible" and actually accessible (laughs) How awkward is a blind date for you? I've never been on a blind date I assume it would be awkward, but it would be awkward for more reasons than me being in a wheelchair

(laughs) Um Blind dates just seem awkward I guess it would be awkward because the first question they'd ask, or like the second question they'd ask after they're comfortable, would be "What's your disability?" and- but that's not just a blind date that's just anyone you meet

(laughs) Um, do you like it when a guy, or person 'cause we're of all sexualities here, gives you more attention because you're in a wheelchair? I mean, it depends Like, I guess I mean

if it's because like they like me because I'm in a wheelchair that's kinda weird 'cause they're probably making some stereotypes and associations there that I don't want made Unless they're also disabled If it's someone else disabled then it's kind of like shared experience, that's the motivator, that's fine

And I would like that I like and then there's also the fact that my wheelchair is covered in flowers, and completely decorated, and I've decorated it a ton of ways

So, if they're giving me attention for that like, why not? It's art I appreciate my work (laughs) Can you have sex? The age old question Yeah (laughs) I can't have "traditional" sex

Um so I mean, and non-wheelchair users also have different needs and wants for sex and I think, the best thing is to communicate, but yeah, I can have sex (laughs) How do you have sex? That is the awkwardest question, that I'm not gonna answer, but like mainly just, have sex How do normal people have sex like, I can't do it standing up I can do it in my chair, if I want to, but mainly you just

do it Do people have trouble making a move on you? I don't know 'cause I'm not other people If we're talking about flirting some people are definitely uncomfortable, and not just with flirting but with complimenting me

Like, I was at the mall earlier and someone was talking to my mom and they were like "I like her hair" I'm like that's nice, but you could've said that to me, so there's things like that, where people don't feel comfortable talking to me and approaching me, and that's very clear, like and that's just not with- that's not just with flirting

That's with everything, but then I think also like some people are really chill I mean, if you flirt with me I'm gonna respond the same way I'd if you flirt with me and I wasn't in a wheelchair It's the same thing, with like, putting your arm around me and stuff like that That's like, easy I mean you can't hold my hand while we walk, 'cause I'm pushing myself, but like

y'know you can hold my hand while we drive, or do other stuff And, so, you know different things but they all work Does your wheelchair ruin the romance? I mean, here's the thing Ruining the romance, I don't think it does, 'cause I have really romantic relationships, and there are ways the wheelchair adds and subtracts from that romance But it does make things hard at times

Sometimes you can't do normal relationship things Like, going out to prom is a little bit harder, and things like that But, the thing is if your romance is defined by those things (laughs) I mean that's not kind of romance Like, if that's the only reason, y'know, it works and like there are plenty of romantic things I can do, and there are plenty of romantic things I enjoy doing There's like, wheelchair specific romantic things, like pushing each other around, or going down giant ramps, or, y'know

So, it works It doesn't ruin anything, and um, that's the last question if you have any more you can send them to my ask box on tumblr: interlude-holiday and um, yeah if there are any other wheelchair users, or other disabled people that aren't chair users who wanna answer the same or similar questions, go ahead 'cause it's good to get as many people as we can talking about this, and speaking about this, because every disabled person has a different experience, and, so, everyone has something to share and to be learned