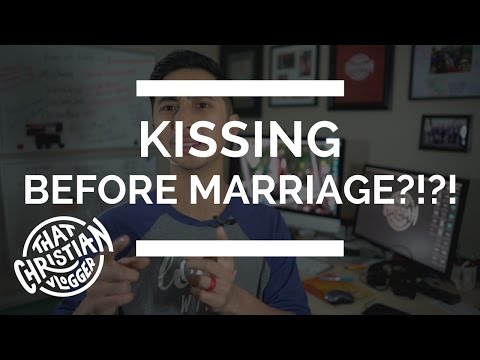 Should Christians kiss before marriage? and How far is too far to go when dating? If you’ve ever had a question about physical boundaries for Christian dating, then stay tuned! Hey everyone, my name is Justin and I want to welcome you to That Christian Vlogger, a place where you get to join me and experience Faith in the First Person On this channel I talk about practical things like Christian dating or how to experience God for yourself every single Monday and Thursday, so definitely stay tuned

Also, I have an entire playlist on Christian dating advice that I will link below, so if you want to go deeper on this subject, you’re welcome! So a patron recently asked me if I could do a video on what I thought appropriate christian dating physical boundaries were This is actually a subject that I’ve gone back and forth on multiple times in my younger life So let me share with you a little about my history When I first gave my heart to God, I was convinced that I wasn’t really putting God first in all areas of my life including if not especially in my dating life I realized that the way I approached dating before then were entirely selfish and just frankly not all that God honoring

So as I do whenever I am wanting to make a huge shift in my life, I decided to search out for more information in the form of books I read a number of Christian books on dating out of the hope to find a little bit more direction One of the most notable Christian books that I read on the subject was a little book called, “I kissed dating goodbye” by Joshua Harris Perhaps you’ve read it before? In this book, Joshua Harris talks about his desire to honor God in how he approached relationships The book talks about how Joshua Harris throws off the conventional model of dating where people seek dating relationships to hook up or to fill voids in their lives only meant to be filled by God

He explains how terribly destructive the modern form of dating can be by calling it, “a training ground for divorce” One of the major points in this book is that rather than dating, Christians really ought to be courting instead In courtship, the couple moves purposefully towards marriage with their parents’ blessing and involvement In this form of courtship, any type of physical intimacy is a violation of God’s ideal and will likely lead to lifelong regret In other words, according to Harris, sex, kissing, prolonged hugging, and even holding hands are all types of activities that Christians should avoid

Now listen, before I move forward with this video, I want to say that I in no way blame Joshua Harris for the conclusions that I made from this book The reality is that I had a choice to believe what I believe as you have a choice to make on the subject too In no way did he force me to believe what I ended up believing, but let’s just say that I don’t think it was the healthiest thing in the world Don’t get me wrong, I’m not saying that anything goes and that it’s totally cool for Christians to be sleeping around and rejecting any type of boundaries at all- because that is definitely NOT what I’m saying The Bible is pretty clear as far as I read it, that sexual intimacy is intended by God for a married man and woman and no one else

Anyways, back to the book So I read this book and a few others that had similar messages and I decided that I would definitely implement these principles in my dating life No kissings, cuddling, or other things that would lead me down the road of temptation Now I had this dating philosophy for a few years and over time I realized that this mindset was really… what’s the word I’m looking for… It was really difficult? No, that’s not it… This mindset was really damaging Such an approach to relationships wasn’t healthy for me or the other person involved

Now when I say damaging, I’m not saying that because we weren’t kissing that this was the damaging part It was… it was much deeper than that For me, the deeper I went into this philosophy on dating, the more I found myself believing some rather unhealthy lies about Christian dating For example, I used to think that if God was leading me, then there wouldn’t really be any danger of having dating relationships that ended with a breakup or with any degree of heartache After all, if God cares for my heart and leads me into whatever relationship I end up in, how could that relationship end in pain or misery? This in turn, led me to believe that if God was truly leading me into a dating relationship or courtship, then of course, that courtship had to lead into marriage! In other words, whoever I date next, must be the person who God wants me to marry…

If He’s truly leading me Now again, this isn’t really what Joshua Harris is saying, but this definitely was what I was getting from the book Incidentally, a few years ago, Joshua Harris ended up recanting this book and publicly apologizing on Twitter for the confusion and pain that many people like me ended up experiencing due to some of these concepts So, after a few years I started thinking about the whole kissing before marriage thing a little bit more I had thought that if I had never kissed while dating, that this would be a surefire way to guarantee God’s favor in that particular relationship

I thought by creating firm physical boundaries that I would free myself from any danger of heartache or pain But these ideas just aren’t true Sometimes God intentionally leads you into relationships that involve pain and heartache Actually, now that I think about it, literally every single relationship that you will ever have will lead to some degree of pain since none of us are perfect and we’re all still growing God does this to teach us about ourselves and to teach us about Him

God sometimes leads us into relationships that are messy and complicated I believe God does this to teach us compassion and love for others and to help us understand the plan of salvation a little bit more Don’t believe me? Try reading the book of Hosea which is an entire book of the Bible about God leading a prophet to marry a prostitute So where exactly do I stand now on the whole physical boundaries for Christian Dating? Well when I first met Emily we did something that I think is really healthy and important to do We actually talked about our values and ideals and how we wanted to conduct ourselves as a boyfriend and girlfriend

Were we okay with kissing before marriage? Or did we want to wait? And this is something that so many couples just don’t do Most couples don’t have an actual conversation about boundaries And I don’t know why we don’t talk about these types of things I mean, they’re going to come up sooner or later So Emily and I decided that we were going to wait… We would wait as long as we could and try to spend the time getting to know each other on a non physical level

And I think this is important- if the physical component is the start of a relationship, it’s so easy to get sidelined and caught up with it all Instead, we tried to spend this time focused on learning more about each other Not superficial things like what color did she like, or what type of music did I listen to, or whatever But deeper things like our purpose in life and what did it mean for us to live as Christians We spent time together in meaningful activities like serving others, volunteering for our church and spending time with each other’s family

We ended up making it like only two or three months of not kissing before we finally broke And, I’ll have you know that Emily broke before me, by the way! I was saying goodnight to her one evening and we hugged each other briefly and she ended up giving me a quick peck on the neck before I even realized what was happening I was like Oh no!!! What did you do! And we had a funny laugh about it A few weeks later, I asked for her permission to give her a proper kiss and the rest was history So clearly, I don’t think that kissing before marriage is a sin and evil or whatnot

I do think that it’s entirely possible to honor God and honor your significant other and kiss before you’re married As far as I’ve read, the Bible only really condemns sexual activity or lust outside of marriage and the rest, is up to us to apply good wisdom and Biblical principles as individuals But those are just my thoughts on the question today and I know there are some of you who might disagree with me In fact, some of my best friends and even family members decided that it would be best for them to share their first kiss on their wedding day But… What do you think? Should Christians kiss before marriage and what are some healthy principles in physical boundaries for christian dating? Let me know what you’re thinking in the comment section below and I will be doing my best to respond to your thoughts there! If you’ve enjoyed this video, consider becoming a Patron and supporting this channel

What is a patron you might be asking yourself? A patron is someone who partners with us and supports the vision of this channel by donating a very small amount each month In exchange, I offer a few extra perks like free shirts, bonus videos, and access to a private Facebook group where you can ask me questions So if you’ve been blessed by the over 100 free videos I’ve made so far and would like to support me with the next 100, you can do so at patreoncom/thatchristianvlogger If you’re unable to do so at this moment, no worries as our videos have always been and will always be free! So until next time, I’m That Christian Vlogger, and I want to encourage you to experience Faith in the First Person