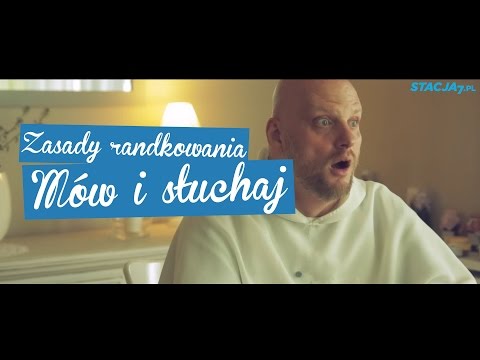 There is something called FAQ and I don't mean "fuck" but F-A-Q, frequently asked questions and one of them in the field of relationships is: "So what do we need to do to be sure that we should marry? What to do to know it?" And this is our today's topic BALLADS &amp; ROMANCES EPISODE 14: DATING RULES: SPEAK AND LISTEN Good morning, God bless

Welcome to BALLADS &amp; ROMANCES As last week, today we continue the trilogy about dating rules We had Rule no 1 – Ora et labora, that is, pray and work, today Rule no 2, which concretely defines how it should be done

We could call it as: "speak and listen" and I know, it sounds trivial and evident, you can say 'Thanks, Father Obvious" But it's a thing we all know in theory but almost nobody does As some of you know, I used to give marriage preparation courses in Łodź, for the couples who want to marry, I also often had conversations with such couples and my experience is that almost always (fortunately not always) I talk to the couple and I feel that they do know something about each other but definitely not everything When I ask about various things, eg

from the past, I hear "she has a difficult situation related to this or that" but when I ask about the details, I hear: "I don't know exactly, she has told me a bit but not everything" Hello? The most important thing allowing me to be sure I can spend my whole life with somebody is the certainty that I know them And what does it entail? Speaking and listening The second rule of dating is that dates should be above all talking and getting to know each other and I know that again (sorry that I'm a bit sarcastic but it's a very common mistake) you'll say that you love sitting together, even late at night, watching films and talking and this makes us get to know each other, partly, but sometimes it's good to simply make a schedule (I know it sounds boring), to write down a list: "60 topics we need to discuss" and cross them out one by one: "Have we discussed it? Has she told me what she thinks about it? What is her opinion about it? What did it look like in her past? How does she see it in the future? What does he think in this matter?" etc This is work, not just spontaneous talking and hoping something will come out of it

And I know that there were such wonderful nights when you sat together and talked, yes, they are a beautiful thing, but you can't build full knowledge of another person only on that These romantic nights of talking about the past etc, are very important, but go further, dig deeper in it, although you know something, try to learn more You should talk to each other to learn who this person is and to learn to express who you are This talking can't be fully spontaneous, because we tend to think: 'Sure, we know we have to discuss various topics and we do that when we can

' No Take a calendar and set it: every two weeks, every Thursday night (and you have that in the agenda) we have three hours together Make a ritual out of it: you make two big mugs of tea or if you prefer, two big glasses of wine, but not too much, or she bakes a cake and he does something special and you know that when there are candles, two cups and cookies on the table it means: 'We have serious things to discuss' If somebody thinks: 'But what we are to talk about?', below this video, in the description, there will be a list of topics, I don't say it's complete, but these are the basic topics you need to discuss in a detailed, comprehensive way, not just mention them: 'And how was your past?' 'Well, I had a difficult childhood' Done

Check NO! This must be done in a comprehensive way Below you'll find a list of topics you definitely need to discuss Every two weeks you sit for three hours and discuss these topics, you make it a ritual and a summary of the two weeks, you tell each other what has been going on, etc etc

I'll make more episodes about it as it's an important topic but this is something to start with When you look at marriages, all of you can notice that, the basic problem and disaster of most marriages is that they can't talk to each other, describe what is going on between them, what they feel, how they react to various types of situations because they haven't learnt it earlier Speak and speak and speak and listen and listen I'll give you an example, I've probably mentioned it somewhere I once had a girlfriend, Nina (Nina, if you're watching it, hello, we haven't seen each other for 25 years, we were in high school)

She was a fantastic girl: believing, beautiful, an ideal one We were together for several months and we suddenly realised after a while of building the relationship (I know it will sound stupid) we were meeting essentially for one purpuse: kissing Really It was so great that we could meet for four hours, she lived in the Pohulanka district, forty minutes by bus from my house, I always read Orwell's "1984" on the way, I won't forget it to the end of my life, I had Orwell's climate in my mind, On arriving to Nina's flat, we talked for about two minutes and then we kissed for four hours After some time, we had the impression that we were meeting only for that

We stopped getting to know each other at some point because there are more pleasant things, continuous talking about various topics, serious and difficult ones, is at times really hard and tiring AND IT IS TO BE SO! The relationship should be so close that around marriage, I mean the time of wedding, entering into marriage, the spouses, for example after 3 years of building their relationship, could think: "So now we can stop talking for at least a month and rest because we have touched all possible topics" Yes, some relationships are like that, but my experience tells me that the vast majority is not, you know something, but you don't know everything about each other And you must know everything about each other to build a relationship, otherwise, you enter into it with a person you don't know, not with a person you supposedly love, as you can't love him or her if you don't know each other so get to know each other The second dating rule, a fundamental one is: speak and listen, speak and listen

Make a plan, write on a piece of paper all topics you need to discuss and (I know it will sound stupid) sit with this list like idiots, and say: "Are we done with point 4? Have we discussed everything? No, we need to add 4a as there are some more issues we must discuss" Talk, talk, talk and don't say: "But I'm rather a quiet person" Learn to talk, learn to show what you think "But I can't express my emotions, I'm a closed person" So what? You must learn to do it, otherwise, it will be a failure

The second rule: SPEAK AND LISTEN SUBSCRIBE Watch other episodes Acknowledgments to LULIRAJ for making the place available for the film set Rule no 2: SPEAK AND LISTEN What is going on with me? – But it was good, wasn't it? – Yes