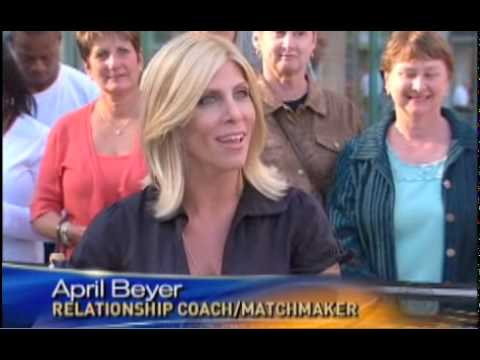 CBS News video Julie Chen: Who pays for what on a date? Can you ask a guy out? Weíve been wrestling with this question for 30 years with no resolution Re-Writing Dating Rules-April Beyer Dating Coach & Relationship Expert Woman on street: I would not pick up the tab on the first date, nor would I ask a man out initially

Women should ask men out on the first few dates In the early stages of dating, Iím happy to pay for myself, because I donít want to feel obligated Julie Chen: We return now to relationship coach and matchmaker April Beyer Good morning, April April Beyer: Good morning, Julie

Julie Chen: All right If youíre a single, professional woman and youíre dating, there seems to be a lot of confusion out there Set the record straight Can we pay for a check? Can we ask a man out? What do you say? April Beyer: My answer, Julie, is absolutely not We are really ruining the traditional way of courtship

And I think a lot of women nowadays, because we have become successful, powerful, strong women and we can afford to pay for our own dinners, I think women are tending to reach for the check And Iím finding that men arenít liking that Julie Chen: Well, I want to put up on the screen a list of the things that you say women are doing wrong, and break it down; explain it to us You say these are dating mistakes: Reaching for the dinner check, Using the phrase: ìIíll get you next time,î Going toe-to-toe with men in a tit-for-tat type of game, and Asking men out on dates April Beyer: Yes

Julie Chen: Why donít guys like this? April Beyer: Itís emasculating Itís emasculating Men, when theyíre courting us, they enjoy that Men love the dating process Now this is a different topic of once youíre in a relationship and then you become partners

And then, of course, itís important to share But in the beginning, men want to take us out They get pleasure from that And reaching for a check? A lot of times women do this because they think itís a way of giving back to that man ìYou got dinner last time

Iíll get it this timeî What itís really doing is itís taking that away from them And I think women need to ask themselves: Why am I doing this? It is because I really want to give back, or am I really trying to gain control back? Thereís a difference Julie Chen: What if the woman makes a lot more money than the guy? April Beyer: That happens a lot and thereís still no excuse If you make more money than a man, he still has to pick a place (and again, this is in the beginning), he has to pick a place that he can afford

So if youíre being asked out by a man and he makes a lot less than you do, you have to assume that the restaurant he chose or the date that he chose is something that he can manage Julie Chen: So now weíre letting him choose the restaurants, too? April Beyer: Yes! Yes, yes, yes Julie Chen: Youíre really saying let the guy take the lead on everything April Beyer: On everything Itís really important

Even if he suggests a restaurant that you really donít want to go to, unless youíre allergic to everything there, let him do it And then the next time you can go to the place that youíd like to Itís super, super important in the beginning This is primal This is a lot deeper than just reaching for the check

And this whole thing of saying, ìIíll get you next time,î to a lot of the men that Iíve interviewed, they think that means: ìI donít want to be in a romantic relationship with you I just want to be friendsî So a man will take a step back after that; yes he will Every time Julie Chen: Are you kidding me? All right

What do you have to say to the women who are listening to this saying, ìYou are setting back the womenís movement by 30 years!î April Beyer: Ugh I hear that all the time, Julie And itís not true Traditions are traditions because they work Men are unhappy right now

Theyíre confused They donít know what to do And women are really unhappy If this is making people happy, I will ask them, OK, if you do want to pick up the check and you want to exercise your independence and you want to do all of these things, and a lot of these younger women that commented, theyíre exercising all of that because theyíre just out of college, so they want to be independent My question back to them is: Is this making you happy? Are you loving being that equal financial partner? Julie Chen: And the answer is? April Beyer: The answer is no

Thereís a lot of unrest right now and a lot of unhappiness Julie Chen: Well, why donít the guys speak up? I mean, did theyÖ April Beyer: Because they think this is what we want: ìOh, I let her pay because she wanted to So I let itî But our paying for the check gets lost on them Whatís more important and more meaningful are things like how to reciprocate like you mentioned earlier

Julie Chen: Wait, letís put that up on the screen And keep a straight face OK, you say these are the ways to give back to a man Prepare a nice dinner at your place Send him a thank you card

Send a book on a subject heís interested in A thank you card? Doesnít that seem a littleÖ April Beyer: Itís a nice gesture It goes a long way Weíre so into the age of texting and email now A phone call and a personal letter: Those things have gotten lost a little bit

I do think that men, when theyíre courting us, they want one thing back They want to know that their efforts are being noticed They want to know that theyíre making us happy So sending a little thank you note, ways of giving back as a woman are, you know, if he comes to pick you up, (and letís just say heís taken you out to three or four really nice dinners and youíre feeling a little uncomfortable and you feel itís a little unbalanced), That might be the time to do something from your feminine energy Make a dinner

They know how to date What they donít know how to do are things that we know how to do Iím just asking women to come up with more creative ways to give back, rather than saying, Iím going to give back in the exact same way that he gives Thereís a difference Julie Chen: If you say it worksÖ April Beyer: It works; it works